Are these the kind of ABC lessons approved by Alberta’s Minister of Education and Premier for K-12 children in our province’s education system?

F is for Felching:
The act of sucking semen from your partner’s butt, as if semen didn’t taste good enough already! Nothing says lovin’ like semen fresh from the oven. If you’re going to chow down on some ass-marinated semen, just know that you and your partner are at high risk for HIV and STIs.

G is for Glory Hole:
A hole in a wall intended to have anonymous sex through (often in washrooms, bars or bathhouses). Glory hole hallelujah! Whether you know who you’re fucking or not, use a condom with lube. Duh.

H is for Half and Half:
When someone sucks your dick and then your ass. It’s nice to split the attention 50/50. That way your butt won’t get some sort of inferiority complex. If you like eating butt, you might like to consider getting a hepatitis A and B vaccination from your local clinic.

These are just three letters from the “Sex from A-Z Cards”. If you want more, here is the link to the entire alphabet.

A few weeks ago I published a blog article exposing how the Alberta GSA Network, funded and recommended by the Alberta government, directed K-12 children to sexually graphic material. In that article I focused mainly on the content offered through “Fruit Loop”, which was just one of the 66 links provided to children as “Community Supports” on the Alberta GSA Network.

The day after publishing my blog article, 18 of the 66 community support links were taken down.

However, certain links with sexually graphic content continued to be listed for another three weeks, at which time the entire community supports section was completely removed from the website.

One of those links on the GSA Network was to a support group called the “Comprehensive Health Education Workers (CHEW) Project”, listed under Central Alberta.

CHEW offers many resources on their website, including the “Sex from A-Z Cards”, which are provided with the following description:

Sex from A to Z is a set of cards intended for gay and bisexual youth. This is a fun and accessible resource that facilitates humorous and frank discussion among youth about sexuality and HIV and STI prevention. It can also be used by service providers as a discussion tool in workshops and training sessions. 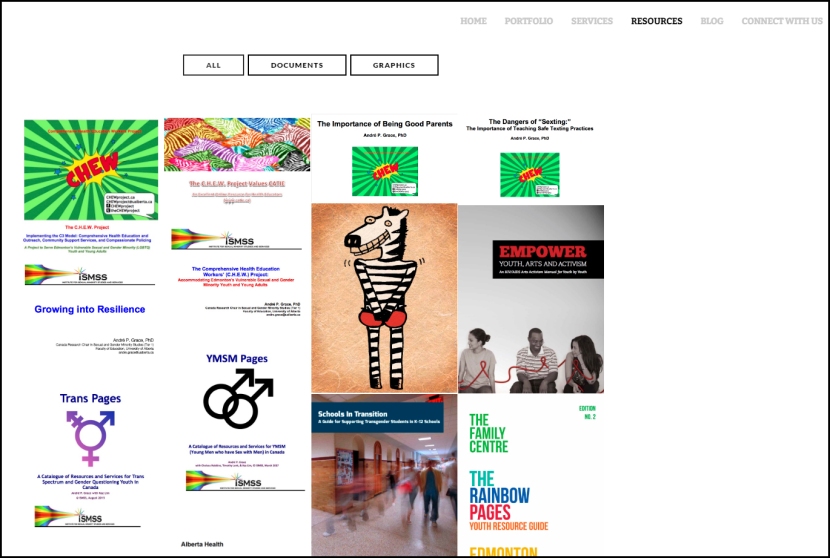 So here are some questions:

Does our Minister of Education consider it fun and humorous to direct youth in Alberta schools to information about felching, glory holes and the promotion of pornography?

How many Alberta parents are laughing right now, knowing their tax dollars funded a website which directed K-12 children to “support” groups offering resources like the Sex from A-Z cards?

Is this the most effective way Alberta Education, under the direction of David Eggen, can teach youth about HIV and STI prevention?

Are there any concerns that material presented to children specifically counseling them on the touching of their own bodies or the body of another person for a sexual purpose is in violation of sections 152 and 153 of the Criminal Code?

Incidentally, the CHEW Project is directed by Dr. Andre Grace, who is also the Faculty Director of the University of Alberta’s Institute for Sexual Minority Studies and Services (iSMSS), alongside Dr. Kristopher Wells.

Not only was the CHEW Project offered as a community support on the Alberta GSA Network for K-12 students, but their organization also advertises in-school classroom presentations, claiming to offer the “real Sex Ed” when they visit your school.

The CHEW Project and iSMSS, under the direction of Dr. Grace and Dr. Wells at the U of A, are indeed eager to get their “real” sex-ed into schools in any way they can. In fact, they are actively promoting their “comprehensive” sex-ed approach to trustees such as Marilyn Bergstra from Edmonton Catholic Schools who introduced a motion two weeks ago to lobby the Alberta government for more comprehensive sex-ed. Bergstra readily divulges on her personal blog that her motion was motivated by attending discussions at the U of A.

After publishing this article, will the Sex from A-Z cards disappear from the CHEW Project resource page, just like all the community support links disappeared after I pointed them out in March?

Does removing links and resources from a website after they happen to be found by a concerned citizen blogger provide any assurance whatsoever, especially when the Alberta government continues to entrust iSMSS and the CHEW Project with tremendous authority, influence and access to children in our K-12 education system?

Removing links on a website does not solve the problem. The problem is not the site, but the source.

I am a parent, taxpayer and trained teacher and I refuse to allow activists to masquerade as health experts just so they can exploit our school system and educate children about their version of the “real” sex-ed.

Time to speak up, Alberta.

Take 20 minutes. Write a one page letter addressed to the Minister of Education, but please mail it to me.

I will ensure copies of your letters are hand delivered to our Minister of Education and to the Education Critics in both the Wildrose and PC parties. Watch my video and get more details here.

Sooner or later each one of our MLAs and school board trustees will have to make a choice:

Will they continue to pander to their sex activist friends, giving them a free pass to our kids and our education system?

Will they take a stand to protect and care for the children of Alberta?

But it will only be a choice YOU can force them to make.

Make sure you let them know your votes will depend on how they answer.

Remember that your voice matters.  Not speaking up has a 100% success rate of accomplishing nothing and will ensure that “experts” offering resources such as the Sex from A to Z cards will continue to advance further into our K-12 school system.

*Please note:  Since filming this video on April 3rd, the entire “Community Supports” section of the Alberta GSA Network has been removed. If you are interested in viewing the links that were originally available, here is a PDF of all community support links and some screenshots: WARNING GRAPHIC CONTENT: GSA Network website supporting documentation

I am a parent, former teacher, and lifetime Albertan who is passionate about ensuring high quality education for all students and families in our province. I am also a strong advocate for freedom, truth, respect and democracy.

This website is intended to inform Albertans about various changes, challenges and choices affecting our education system and to provide information on how people can respond and further engage in these important topics.

As the adage says “Knowledge is power” – and it is only when we are fully informed that we can make the best decisions for ourselves, our families and the future of our province.

Starting in 2017 I also began working part-time as the Communications Advisor for Parents for Choice in Education (PCE), an Alberta-based, non-profit organization advocating for excellence in education through maximum parental choice.  I encourage you to check out parentchoice.ca and sign-up on the PCE homepage in order to stay up-to-date through valuable monthly newsletters and alerts.

If you have any questions, comments or suggestions, please email me at informedalbertans@gmail.com

Thank you for your time.